Mrs. Lila Gandharba, a permanent resident of Birendranagar Municipality, ward number 12, Neware Tole, has become a first sanitation card holder endorsed by municipality dated on 14th July 2012. The reason behind getting the first sanitation card is, she helped to declare ward number 12 as Open Defection Free area by making permanent toilet though she was in very trouble. Her feelings are written here to her own words as: 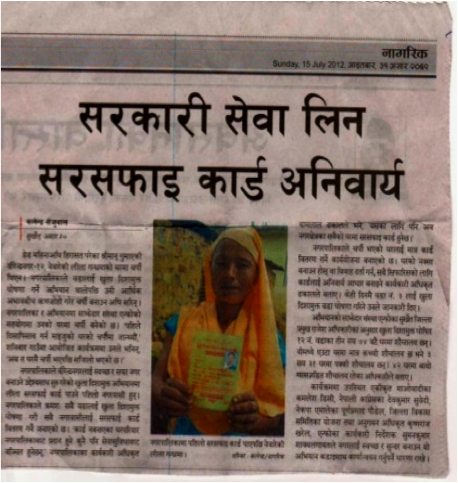 “I, including my family, was living at our small home. My husband was caught by police in one unavoidable and tragic case and he was died in the jail. I was so horrified with that case and surrounded with lots of problem and legal process. Another, I had to admit my two small children in school. I did not have any financial back up to do that job due to poverty. At the same time, our tole member forced me to construct toilet and also staff from ENPHO shared the benefits of having toilet at home but, still I didn‚Äôt have resource to construct toilet and it was just like a day dream to construct permanent toilet at that moment. Despite of these problems, I had committed to build toilet and the partial support was provided by ENPHO and Municipality which made me easy to construct it in time. On the next day there was open defection free declaration program in my ward and I was also there to celebrate that program. Suddenly, my name was announced to receive first sanitation card and I went in front to receive the card and they asked me to share something. At that time I became a speechless for a while and tears were flooding on my eyes and I was so happy at that time because I was also part of the program. Than after I returned back to my own schedule but, the ENPHO staff came to my house and show my photo in national newspaper which made me to forget all my pain for a while due to great happiness.

This time, proudly said that I am a first sanitation card holder from municipality and also my days are so much easier because I have a toilet at my own home.”