ICCO’s WASH partner in Nepal, Sahakarmi Samaj and thematic partner PRACTICA Netherlands, has tested two new water pumping technology in Dang and Banke districts of Nepal. The two techniques, Canzee pumpand Rope pump are successfully installed, for the very first time in the country, amidst doubts and curiosity from the locals in a very dry season of May. 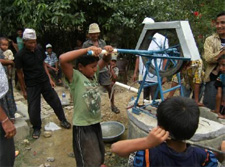 It was tested in two existing wells, where the water tables had gone down and the normal water pumps used by the villagers were not able to pump water, as it normally happens during this time of the year.

The technicians from PRACTICA went to the locations, physically worked together with local technicians (mistris) and local workshop in Nepalgunj and produced two apparatus. Almost all parts of the apparatus can be replicated in local workshop. The equipment and apparatus were taken to the sites and installed. Very clean looking water immediately came out of the drier wells to the surprise of the villagers. Both of these techniques require much less physical effort and enough to provide water for household. These techniques are not meant for pumping water in big volumes such as irrigation.

Though it is too early to draw conclusions, the enthusiasm and optimism from the villagers are not hard to see. There is already demand from individuals.

Sahakarmi Samaj, a local NGO, is working on making news steps, which is to formally organize the mistris into a cooperative, try new drilling techniques later in the year, organize further practical training to mistris on the successful techniques and also identify local workshops to produce the apparatus.

This site uses Akismet to reduce spam. Learn how your comment data is processed.